
Copyright © 2020 Fortuneteller Oracle - Your Source for Social News and Networking. All rights reserved.

Shaping the Future of Workplace with Virtual Reality

Shaping the Future of Workplace with Virtual Reality

oodlestech1
posted on 2 months ago
38
views
News
Originally the use of Virtual Reality Technology was associated with gaming. After realizing its potential in the entertainment sector various industries are now using it to drive sales revenue and improve workplace conditions. In this article, we will discuss how virtual reality can shape the future of the workplace

Shaping the Future of Workplace with Virtual Reality

The trend of Virtual reality got popular with game-obsessed teenagers wearing goggles, fascinated by floating through space directly from their home. After Virtual Reality’s success in the entertainment sector, this technology is now implemented at various organizations to accelerate processes.  We as an AR VR app developers receive requests for designing Virtual Reality app that facilitates in the progress of an organization.

The  Futuresource Consulting reports confirm that the VR market volume is expected to reach 98.4 million sales by 2023.

Facebook acquired Oculus VR in 2014 and since then it is a prominent player in the space. It was anticipated that the company may spend more than $5 billion annually on VR in the coming years.

Various virtual reality applications have the potential to shape the future of various industries including journalism, healthcare, and manufacturing.

Employee Training with Virtual Reality: Leading organizations like Walmart partnered with Virtual Reality creator Strivr, to train employees for its Black Friday sale. Using the immersive technologies employees are trained for an event they are not used to. Virtual headsets like Oculus are used to create a virtual environment for the employees to enable them to deal with life-like situations.

Oculus VirtualSpeech enables employees to enhance their public speaking skills within a stipulated environment. The employees can upload their presentation slides that include a virtual room to identify the areas of distractions. The technology provides real-time feedback to the employees to enable them to improve their skills. Medical practitioners use VR technology to enhance their skills in a risk-free but life-like environment. The Children’s Hospital of Los Angeles (CHLA) used Oculus devices to train its staff to deal with the patients of high-risk pediatric trauma.

Current applications of Virtual Reality in healthcare include pain management and physical therapy.  The technology has the potential to mitigate pain. A VR app named “Cool” was used to examine the effects of VR on patients suffering from chronic pain.  DeepStream VR developed the Cool app in 2014 examined that VR reduced 60 percent pain of the patients while 30 percent of patients were diagnosed with a disease.

In an article published in Clinical Pain Advisors, Jones said that “We could be on the verge of a new era of pain treatment in which medications are rarely used, and VR is a primary treatment modality.”

Oculus headsets are also used by doctors for patients dealing with trauma. Traumatized patients are given headsets to focus on the objects that bothering them.

PwC explains how Virtual Reality is used by Manufacturers: Immersive technology is used by companies for remote maintenance. A field technician relays a live image of a product that requires fixing. The remote colleague provides instructions, data or images that enable the field technician to repair it easily. Field technicians use Smart Glasses to ensure all parts are assembled in the right sequence. 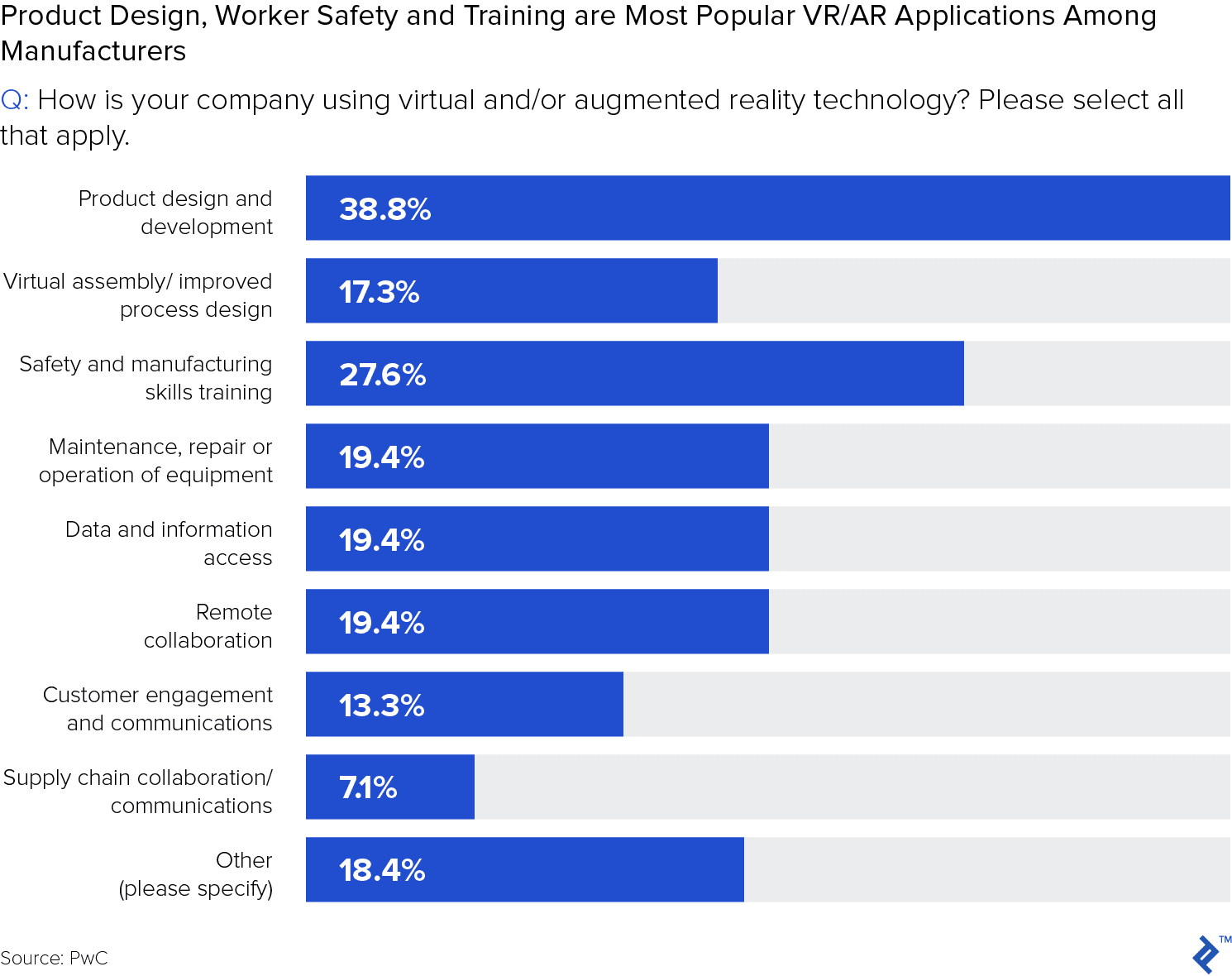 Virtual Reality facilitates a new method for storytelling. It is significant that technology is poised to play a great role in the field of journalism. Immersive content can enable journalists to tell stories. The Associated Press conducted a research in 2017 and determined that 3D content production will be a part of the newsrooms across the globe. Also that the 3D content will also change the way journalists tell stories and people consume news.  According to the New York Timepiece 2017 research, “Life on Mars,” various 360-degree videos were used to enable the readers to understand Mars-like conditions. During this study, the NASA research team lived on an isolated volcano Mauna Loa volcano in Hawaii.

Are you planning to use Virtual Reality technology to accelerate your business training or processes? We are a well established AR VR app development company that enables businesses to unleash the potential of the technology and use it to accelerate their processes.